Pictures from the show: 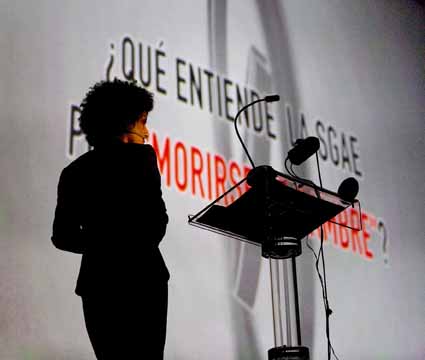 “This space belongs to everyone. Keep out of it.”
Aleix Vidal Cuadras, politician.

It seems that we are living in a time of tension in our cities. Cracks are appearing in our way of life; angry crowds are on the streets demanding the implementation of the laws that guarantee housing for everyone; uncontrolled exchange of information is taking place on the internet; citizens are using the city as if it were their own and singing songs as if they owned the rights to them. People are losing respect for property. This interactive performance conference offers to crisis-struck governments, political parties and the powers that be, solutions to pacify their citizens’ discontent, to clear up all misunderstandings and to stop citizens taking their rights into their own hands.

The Advanced Realities Foundation: one speculator, one vote

Video of the performance:

Get ready, Democracy is about to arrive
(some notes on Advanced Realities)
Text by: Leónidas Martín (full text here: leodecerca.net)
There is a crack in everything. That’s how the light gets in.

Someone once said that the act of resisting always opens up the way to a new start. This is exactly what Advanced Realities is – a risk-taking and wacky and new start. (…) It’s true that co-operation amongst equals, what we could call the peer-to-peer condition, is in itself an act of resistance against some authorities, such as those re p resented by intellectual property management bodies. But Advanced Realities isn’t pre p a red to stop there. They take it one step further by suggesting that it can be a creative act as well as an act of resistance. (… )In this sense, this piece is somewhat similar to the “new sciences”, which search for unexpected possibilities, emerging patterns that are able to change life or, at least, show us new ways of seeing and living it. (…) The right to exclude others is the main characteristic of our current idea of property.… well then, after attending a session of Advanced Realities, you will have the impression that ownership can also be defined as the right to not be excluded from using or enjoying something (a house, a song, a park). That is, if property marks the boundary between those who have and those who don’t, Advanced Realities – not just the stage show, but also the copyleft DVD produced for the occasion and distributed at each session – offers us tools that can be very helpful to those who want to break the siege. (…)

Videos included in the performance:

ADVANCED REALITIES began life as a video spread anonymously by Conservas as one of the agents of the city’s social movements, in the context of the struggle against property violence. The video, a short fiction piece that also includes real images re c o rded with a hidden camera, uses caustic humour to condemn the network of real estate and financial bodies that, with the complicity of the authorities, practice widespread property and urban planning violence by making it impossible for people to exercise their constitutional right to decent housing. In just two days, this video received thousands of hits on YouTube and became the mostwatched Spanish video that week. There was an enormous press response, and political parties were forced to issue denials and “promises” (which haven’t been kept yet!..) four days before the election. Soon after, a request from well-known financial institution La Caixa led YouTube to censor this video alleging a non-existent copyright infringement, This caused a chain reaction of solidarity and protest by Internet users who uploaded the video on a massive scale. The video has currently be seen by 100000 people and appears on hundreds of forums.